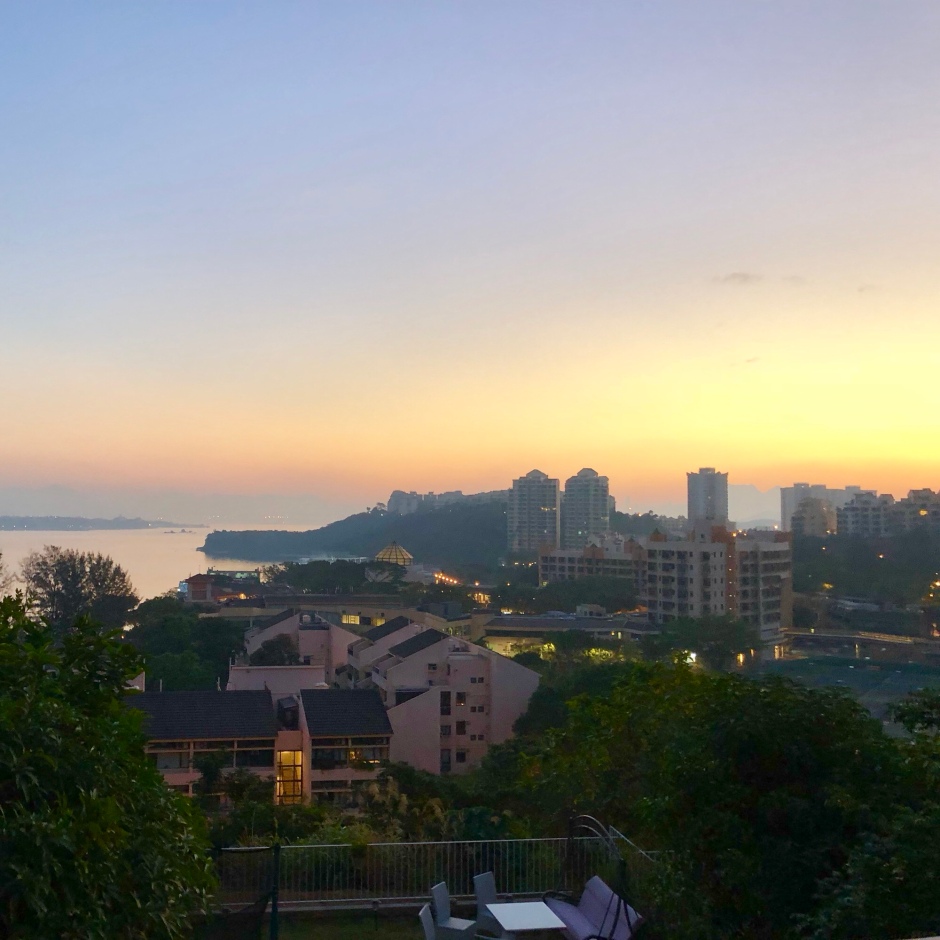 That was what I told everyone back in New York when they asked me what I would be doing after relocating to Hong Kong. There would be no more waking up at 6:00 AM, three hour commutes, ten hour workdays, or chore-filled weekends. Most importantly, no more feeling guilty about spending more time in the office than I did with my own daughter. I had grand visions of us watching the sunrise from our oceanfront flat, brunching by the beach, and making Pinterest-worthy artwork together.

Like many trailing spouses that arrive in this city, I opted not to work so that jigg can focus on his job while I settle our family down. I never intended to become a stay-at-home mom: my goal was to spend more time with the Dumpling, not all of my time. It turned out that way, however, because there are no daycares in Hong Kong…something I didn’t know until I arrived. Anyone who has cared for young children would know that my plans for a perpetual vacation went out the window the moment I found that out.

This full-time mom gig is turning out to be the crappiest, and as cliche as it sounds, also the most rewarding job I ever had. On one hand, the Dumpling dictates when I wake up (which is now 6:30 AM instead of 6:00 AM), what we watch on TV, and basically what we do on most days. I often found myself counting down the minutes to her nap and bed times when she behaves like…well, like a two year old. Like the time she found a piece of dog poop in the sandbox. Or the time she insisted on taking the stairs up the hill to our apartment, changed her mind midway, and made me carry her the rest of the way. Or the time she made me look like a kidnapper because I had to drag her home from the playground.

Then there were sweet moments—moments that I would have missed if I weren’t home, scattered in between that made me forget all the physical, emotional, and mental abuse that she put me through. During the last three months, I got to eavesdrop on her nonsensical conversations with herself, listen to her off-key rendition of “ABCs” on repeat, and do countless potty dances with her. It’s simultaneously annoying and heartwarming that she wants to play with me all the time (except when jigg is home, then I’m just chopped liver). I know these days won’t last; sooner or later, it would be me who wants to spend more time with her.

While I fulfilled one aspect of my life that was missing, it created a void in another. Walking away from my career felt like I threw away everything I have worked for in the last 32 years. In a time where “leaning in” is celebrated as the modern woman’s goal, “leaning out” seemed to be the antithesis of what I was taught. What was the point of my mother’s sacrifices so I can concentrate on school? Of me working so hard? Of my family, friends, and mentors investing so much time and effort in me?

For the first time since I was 14 years old, I no longer brought home a paycheck, which had served as a self-esteem booster and a measurement of success. It was also a social equalizer in our household because when I worked roughly as many hours and brought home just as much as my husband, it was hard for anyone to impose gender-based responsibilities on me (not that jigg ever did). I used to tell people what I did for a living with pride; now I’m just unemployed.

I miss working…not the hours, stress, or commute, but the opportunity to interact with smart people, be challenged, and thrive. There are ideas buzzing in my head that I wish I had more than just the Dumpling’s nap time to work on. For someone like me, I realized that I can never truly lean out. Currently, I’m trying to find fulfillment as an aspiring mommy blogger by combining motherhood, crafting, and skills from my former life.

My new boss (the Dumpling) is a hard-to-please dictator, my hours are longer, and I’m pretty much a one-woman team…so much for retirement!

Working moms today are often harshly criticized because we are held to almost impossible standards—we are expected to work like we don’t have kids; and we are expected to raise children like we don’t work. Even when fathers are assuming more child rearing and household responsibilities, they are praised as doing extra while mothers are seen as only doing par. The home is still seen as our primary domain, and it’s up to us to figure out how to level the playing field if we want to be with the big boys in the corporate world.

Like many female colleagues of my generation, I was encouraged to “have it all” and look up to women who seemingly found a way to balance work and motherhood. I found myself struggling to sustain my career momentum, however, once the Dumpling come into the picture. In a fast-paced city like New York, where nine hour days are the minimum and anything above is normal, the grind can be especially gruesome. Compared to my colleagues who come in earlier, leave later, and participate in after-hour social events, I often feel like I’m not a team player because I dart out of the office at 5:30 pm.

While other moms are more understanding, there are a few who think every woman should make the same sacrifices they did. There’s the successful female executive with the “I-did-it-and-so-can-you” attitude who thinks the rest of us are just a bunch of complainers. Then there’s the stay-at-home mom who questioned my judgement in putting the Dumpling at daycare when she was only six months old.

Although progress is headed in the right direction, corporate America still isn’t too family friendly. Maternity leave is not mandatory and left to the discretion of the employer. Americans also clock in more hours per week (special shout out to New York!), have fewer holidays, and vacation days compared to most of our European counterparts. While taking holidays and long lunches are culturally acceptable in Europe, it carries a negative stigma in the U.S. The higher up the corporate ladder the we climb, the more we are expected to be accessible 24/7 and available to travel regularly.

Even if moms are willing to grind it out, childcare is a common challenge. The core U.S. household is typically made up of only the parents and their children. Therefore, extended family members, like grandparents, do not play major roles as caregivers on a daily basis, and most working parents are forced to seek outside help. Day cares often have long wait lists, are expensive, and penalizes heavily on late pick-ups. jigg and I pay $270 a week, and we are fortunate to have our in-laws do the evening pick ups and babysit for about an hour until I get home. Otherwise, the current local rate for a nanny runs anywhere between $15-$25 an hour. While live-in helpers are common in Asia for many middle-class families, they are entirely out of reach for most in the U.S. For example, a cost of a live-in helper in Hong Kong, who helps with not only childcare, but also cooking, cleaning, errands, and general household chores six days a week costs approximately $4,010 HKD per month, or $514 USD. That’s about a week’s pay for a nanny in the U.S.

Modern parents also need to be very involved. Child experts recommend a barrage of activities that parents should do with their toddlers to develop their sensory, gross motor, fine motor, social, and communication skills. Once school starts, parents are expected to review homework assignments, attend parent-teacher conferences, volunteer for funds raises, etc. Most of these responsibilities inevitably fall onto the mother.

Society in general has expectations (often hidden in a form of unsolicited advice) of how our children ought to behave by cherry picking from the best practices across different cultures. My elders brag about how they managed to put dinner on the table every night, do chores by hand, and raised kids without the fancy gadgets. I’m told to admire the French, who cook sophisticated meals for their children and are firm in their discipline. Compared to Americans, we have raised a kiddy population of obese, picky eating dictators. My Chinese relatives bring up how so and so enrolled their children in swimming, piano, and Mandarin classes and advised I should look into them as well before my daughter falls behind. 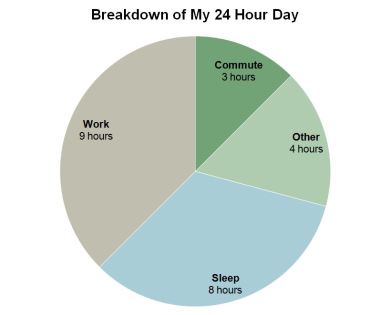 It’s no wonder that I always feel like there’s not enough time; I’m working two full time jobs on a daily basis. In the span of 24 hours, “work” and “commute” take up approximately 12 hours of my day; there’s not much I can do to easily change these unless I quit my job or move closer to the city. “Sleep” takes up eight hours (Do I really need eight hours? Yes, I do), which leaves me with the remaining four to do everything else under “other”.

“Other” is a category that includes getting the Dumpling ready for daycare in the morning, then feeding, cleaning, playing and putting her to bed at night. Somewhere in between, I also have to eat, tidy up the house, and make time for jigg and me. I’m scratching my head trying to find time to do everything else I’m supposed to be doing as a “good mother.” If I attend that happy hour, I would miss tucking my daughter in bed. If I cooked in the evenings, being in front of the stove would take away from time spent reading to her. If I enrolled her in weekend classes, she would be spending even more time with outside caregivers than her parents.

Learning from my elders and parents in other cultures should serve as an inspiration. But when their best practices are used as baseline comparisons of how I ought to parent, it’s easy to become disheartened. I remind myself that while they face challenges that I cannot relate to, I have career aspirations and societal expectations that my mom didn’t have, or work hours and childcare costs that my mommy friends from other countries don’t face. As a result, I pick and choose my parenting battles and accept that I do some things better and fall short on others.